This was the signature song from the ‘Lego Movie’, which was released in 2014. This movie – filmed entirely with animated Lego – is a brilliant multi-level piece for kids and adults alike, providing great excitement and action for children and also delivering wonderful spoofs of many movies and cultural icons.
The ‘Everything is Awesome’ song features in the first section for the film, which spoofs dystopian moves like e.g. Total Recall, Running Man, The Time Machine and Zardoz.  In these films, cowed populations – living in authoritarian states – are controlled and spoon-fed what to do, how to live, what TV to watch and which song (yes, just one song..!) to sing. The song is another variation on the ‘hopeless fancy’ computer-produced song from George Orwell’s classic novel ‘1984’ – i.e. designed to dumb down and placate…
If you’ve seen the Lego Movie you’ll know that the song is maddeningly catchy…you find yourself signing ‘Everything is Awesome, everything is cool when you’re part of a team’ for days afterwards. So it’s a good brainwashing tool.
Overall the key message from the film is simply this:
We don’t succeed or thrive as humans, when we are stuffed into boxes with our creativity and freedom stifled. The film’s ‘baddies’ seek to have everything packaged and boxed into doing exactly what they want – including all of its people. The workers sweat away daily at building Lego from pre-defined templates, but really this is not a sustainable and fulfilling world and it is eventually defeated such that people are able to live free and e.g. create their own Lego structures. 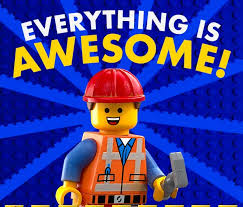 Overall the human spirit prevails, based around individuality, independent thought, love and creativity, which are all ultimately the pillars of a fulfilled life.  We can’t impose conformity on people and work needs to be rewarding beyond simply following instructions.

So, how does this relate to the ITSM industry?

The story and the message are remarkably close to the way that we think about ITSM and ITIL, particularly with reference to more recent agreement around the need to focus on people, culture and relationships.
In simple terms, to me the pre-defined Lego in a box-set is analogous to our thirst for silver bullet solutions and how we have tried to approach implementing Service Management. In other words it’s dangerous and difficult to pre-can your processes and solutions and also then expect them to be accepted and followed by people.
The way that the ITIL industry has evolved has resulted in a misguided expectation that ITIL will deliver a kind of ‘boxed set’ of change, success, value, improvement etc. – although of course the reality is that this doesn’t happen – not at least without significant work and organisational change management.
The Lego pre-designed box sets provide a specific result and outcome for the buyer, however this doesn’t actually teach them how to create other type of model, compared to using standard Lego pieces where creativity is needed. Similarly if organisations expect ‘ITIL out of the box’ to work for them they will be disappointed as this will also need context and organisational-based application.
So the message here is that just sending people and ITIL training and buying tools which deliver ITIL ‘out of the box’ will not guarantee success, as this requires flexibility and creativity to make change happen across the organisation. This in turn needs people to be ready and willing to change, and this doesn’t happen by forcing standard delivery models and work practices on them. Remember – We can’t impose conformity on people and work needs to be rewarding beyond simply following instructions.

Where are organisations going wrong?

Whilst we might be saying that the ‘ITSM Industry’ has created a bit of a monster that sets the wrong expectations for business and enterprises of all shapes and sizes, the reality is also that many organisations themselves haven’t grasped the essential elements and requirements that are required.
For many IT/Technology people and departments, ITIL looks like an easy ‘packaged’ option that they consume ravenously as a means of solving problems without the need to consult or sort out difficult organisational or political issues.  ITIL looks like a ‘system’ and development model for technology, has its own language and acronyms, its own internal processes that relate to IT, so it’s an attractive and preferable option for many technology focussed people. It’s become another ‘IT thing’, rather than a means to improve service to the businesses and customers that are supported.
So whilst the ITSM industry has created the IT opiate (or Kool Aid), the practitioner industry has lapped it up and got high on it – all meanwhile whilst the customers have looked on in disgust. Nowadays of course they can – and do – go elsewhere, now that they have understood that buying and using technology is not a black art and they can probably do it better…

How can we succeed?

ITIL and ITSM are too often seen as silver bullet / panacea solutions to problems that will never frankly be solved by processes or technology alone. If we really want to deliver Awesome Service Management then we need first and foremost to have awesome people working together as an awesome team.
In the Lego movie the characters on the ‘good’ side went through the usual ‘journey’ of fighting amongst themselves before uniting as a team to beat the enemy. Its just the same in ITSM – we need to challenge our colleagues on how things are done and how can we improve – often this doesn’t go down too well with staff that have done things a certain way for many years and this can cause internal problems.
However the only way to improve is to meet these challenges head-on with professionalism, transparency, great communications and positivism, to find unifying goals that meet the needs of the customer and supported business first.
Again this is difficult to do in an entrenched organisation but one thing is certain – it won’t work with a ‘one size fits all’, ‘box set’ approach. You can’t simply run a project that will ‘change people’ – you have to change the environment so that they will see the need for change and want to act differently.
Teamwork and shared goals are essential, as you need the skills and knowledge as well as co-operation of people across your service organisation and ‘supply chain’. In order to get this level of shared commitment, its vital to get people on-board with the real issues that are being faced and the potential benefits of solving them. So the need here is to involve people and let them be creative and flexible in coming up with solutions, not simply creating a whole level of processes and practices that they don’t agree with or haven’t had any input to.
In the movie, the main accidental-hero character, Emmett, saw no need to change or challenge the status quo or his eternal signing of ‘everything is awesome’, until he realised that there was a dark side to his society, but also more importantly – not until he was emotionally affected by this (in love and wrongful accusation…).
So we need to find ways to make the issues clear so that people are motivated emotionally to change – e.g. a technical team may not see the need to make changes that speed up the resolution of some incidents, yet this might be adversely affecting business performance.
We have to find ways to shine a light on issues/impact and emotional response in order to motivate our people to change…So experiential sessions like simulations, role playing and of course customer exchanges all help here – probably much more than simply ‘sheep dipping’ staff through process training, which may not give them the same level of engagement.
Overall then if we want to do the right things to achieve success and deliver ‘Awesome Service Management’, we have to get our priorities right – much like we see in the film – around the human spirit, love, fulfilment and creativity. To get the best from people we need to make them want to deliver the best and use their own initiative to do the right thing, not simply blindly follow instructions (that may not be correct in the first place.

Culture and the demon SLAs

The final point here is also that we have become too closely obsessed with seeing the culture of SLAs as defining success, rather than focussing on the wider business and service relationship. SLAs are useful as a framework, but for really awesome service its important that staff/analysts are able to step beyond the stricture of the SLA and deliver the best possible Customer experience.
It’s impossible to create an SLA that will deliver an appropriate response to every possible situation, so let your staff have the freedom to use their initiative and to take responsibility to go the extra mile.
Kids will use a Lego set as a starting point but then develop the model from a sports car into a spaceship – let your staff use the SLA as the guide which is then modified and improved when needed to meet your customers’ needs.

Leadership – This isn’t just about management, but everyone needs to show commitment and take responsibility for what they do. Leaders also need to show understanding and clear focus around customer experience
Principles – more important than process, principles allow an organisation to set a framework for its people to operate flexibly within. So e.g. the SLA may be the process, but people are mandated by an higher principle to deliver the best customer experience, which may simply by-pass the SLA
Culture – this must be positive, supportive, transparent, collaborative, self critical and engaged in constant self-improvement. Management set the tone and people will follow.
Communications –we need to get away from everything in emails and project documents. Real communication happens when people are engaged emotionally not just intellectually, so use storytelling, graphics and other simple devices to get the right message across
H2H not B2C –ultimately we are all humans (not Lego figures..!) and we need to remember and recognise that good work is best done when people interact as human beings and not as cogs in a machine. We should aim to use personal communication wherever possible in order to build trust and confidence across people and teams.

Once you have the right culture in place, then ITSM processes and tools can be much better utilised to support doing the right thing and delivering awesome service.
This is opposed to expecting turnkey ITIL process and technology to deliver this for you. It’s an important distinction.
In similar fashion the Lego movie shows us that we can’t force people to be automatons and expect value or quality – ultimately in order to be awesome as a team, we need to be allowed to be individuals too…
That’s how you will deliver ASM – Awesome (not Average) Service Management. Of course we know that in IT as in other walks of life, ‘Everything most definitely isn’t awesome’.
The film highlighted our need to empower the human spirit to try and fix that – ITSM in your organisation can also benefit from that message…